Interested in learning more about Schleswig-Holstein? Click below to read the description and find out more about:

Interested in learning more about Schleswig-Holstein? Click below to read the description and find out more about:

Schleswig-Holstein is the northernmost of the sixteen states of Germany, comprising most of the historical duchy of Holstein and the southern part of the former Duchy of Schleswig.

Its capital city is Kiel. Other important cities are Lübeck, Flensburg and Neumünster.

Neumünster
Culture:
Due to its Danish and Frisian influences, the culture of Schleswig-Holstein is quite diverse. It is characterized by historical and geographical factors such as the situation between the two seas, the North and the Baltic Sea, as well as the preliminary rural culture. Especially in the north of the Scandinavian influences in architecture and interior design is evident.

Thomas Mann, Johann Heinrich Voss, Theodor Storm
In musical terms, the country is home to the 1986 by Justus Frantz founded in Schleswig-Holstein Music Festival, the largest classical music festival in Europe. It is presented annually in July and August, about 130 concerts for over 100,000 visitors, distributed to 30-50 venues around the country.

Lübeck Theater, Kiel Theater
The spectrum of the 250 Schleswig-Holstein Museums is broad. It extends from the central national museums to the Stiftung Schloss Gottorp on the historic castles and large houses in the cities to a variety of local museums.

Stiftung Schloss Gottorp
The Medieval Spectaculum in Hohenwestedt offers every year a three-day spectacle with medieval markets and jousting tournaments. Cuisine:
Cooking in Schleswig-Holstein has been molded by both its location and its climate. Meals in this region are historically rich and healthy, and often high in fat. The high calories were needed to sustain health in the harsh weather and winds of the region. Popular dishes include stews, hams, and a large variety of seafood. Meat dishes are primarily beef or pork and vegetable dishes are most commonly potatoes, kale and cabbage.

Schleswig-Holstein is also known for its Marzipan, which is sold around the world. Lübeck was once known as the Capital of Marzipan. Here, the first Marzipan factory was opened in 1806.

Economy:
Being a low-lying region, Schleswig-Holstein has excellent natural harbors along the Baltic coast. The state has fertile agricultural lands. Farming and cattle raising is pursued, although agricultural production accounts for less than one tenth of the state’s yearly output.

Shipping and fishing are important along the coasts. Manufacturers of Schleswig-Holstein include ships, textiles, electrical goods, paper clothing and machinery.
There are oil fields in the Dithmarschen region in the southwest. The islands of Sylt and Föhr and the southern Baltic coast are popular tourist resorts, while Eutin, Lübeck and Schleswig are historic centers.

Schleswig-Holstein is an ideal place for holidays for the whole family. The clear waters of the Baltic, its gentle waves and white beaches mainly attract families with children to the many seaside resorts along the entire eastern coast. Traditional roofed wicker beach chairs providing protection against the wind and sun, restaurants along the waterfront offering a view of breath-taking sunsets, and walks along the beach. Fans of waves breaking on the beach venture out to the North Sea islands of Amrum, Föhr and Sylt. The western coastline of the mainland also has wide, sandy beaches: St. Peter Ording is a paradise for sand-yachting. Birdwatching and beach holidays can also be combined on Germany’s only island in the open seas Helgoland. 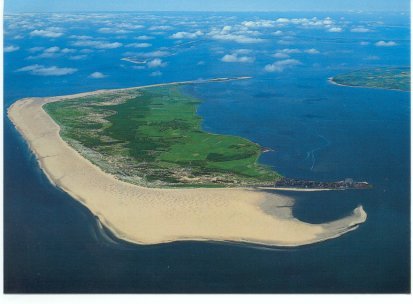 Helgoland
Once a year, Schleswig-Holstein’s state capital Kiel becomes a Mecca for all regatta sailors: Kiel Week, the world’s biggest yachting event, is held here in the last week of June. Hundreds of boats from home and abroad visit the Kiel Bay and make Kiel Week one of Europe’s biggest festivals.