Officially, the Federal Republic of Germany (Bundesrepublik Deutschland) is a federal parliamentary republic in Europe. The country consists of 16 states while the capital and the largest city is Berlin. Germany covers an area of 357,021〖km〗^2 and has a largely temperate seasonal climate. With 81.1 million inhabitants, it is the most populous member state and the largest economy in the European Union. It is one of the major political powers of the European continent and a technological leader in many fields.

Germany was a founding member of the European Community in 1957, which became the EU in 1993. It is part of the Schengen Area and since 1999 a member of the Eurozone. Germany is a great power and member of the United Nations, NATO, the G8 the G20, the OECD and the Council of Europe, and took a non-permanent seat on the Un Security Council for the 2011-2012 terms. 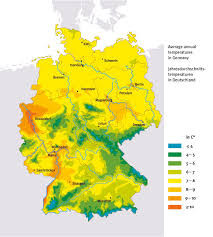 Most of Germany has a temperate seasonal climate in which humid westerly winds predominate. The climate is moderated by the North Atlantic Drift, the northern extension of the Gulf Stream. This warmer water affects the areas bordering the North Sea; consequently in the north-west and the north the climate is oceanic. Rainfall occurs year-round, especially in the summer. Winters are mild and summers tend to be cool, though temperatures can exceed 30 °C

It has the world’s fourth largest economy by nominal GDP (€2.570 trillion) and the fifth largest by purchasing power party (2460billion). It is the second largest exporter and third largest importer of goods. The country has developed a very high standard of living and a comprehensive system of social security. Germany has been the home of many influential scientists and inventors, and is known for its cultural and political history. Of the world's 500 largest stock market listed companies measured by revenue, 37 are headquartered in Germany. In 2010 the ten largest were Volkswagen, Allianz, E.ON, Daimler, Siemens, Metro, Deutsche Telekom, Munich Re, BASF, and BMW. 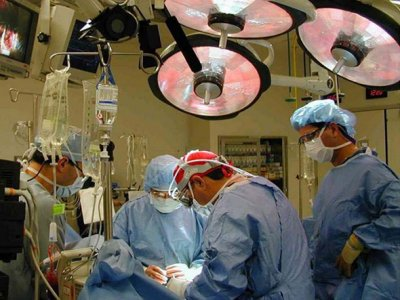 Germany ranks among the EU Member States as one of the countries with the highest healthcare expenditure, exceeding 11% of its GDP € 2570 billion, providing state of the art medical coverage for all its inhabitants. The number practicing physicians per 100.000 inhabitants reached 364.1 in 2009.
Health insurance in Germany is available to everyone. Benefits are broad and nationally uniform, with only minor variations among plans. They include free choice of doctors, unlimited physician visits, preventive checkups, total freedom from out-of-pocket payments for physician services, unlimited acute hospital care (with a nominal co-payment), prescription drug coverage (with a minimal co-payment), comprehensive dental benefits (with a 25–30% co-payment), vision and hearing exams, glasses, aids, prostheses, etc. inpatient and psychiatric care (and outpatient psychiatric visits), monthly home care allowances, maternity benefits, disability payments, and rehabilitation and/or occupational therapy.
Culture: 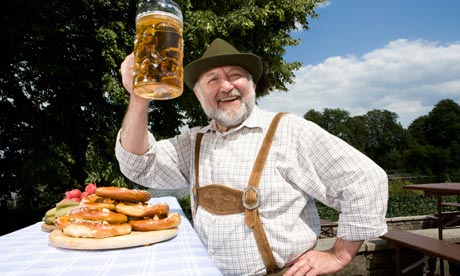 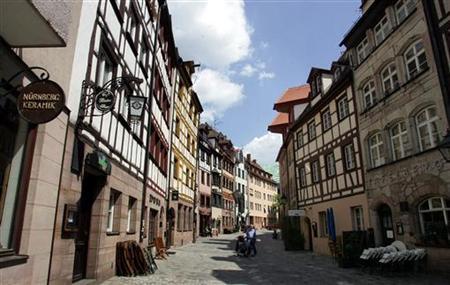 The German culture has been shaped by major intellectual and popular currents in Europe, both religious and secular. Historically, Germany has been called “Das Land der Dichter un Denker” (the land of poets and thinkers).

The federated states are in charge of the cultural institutions. There are 240 subsidized theaters, hundreds of symphonic orchestras, thousands of museums and over 25.000 libraries spread in Germany. These cultural opportunities are enjoyed by many: there are over 91 million German museum visits every year, annually 20 million go to theaters and operas, 3.6 million per year listen to symphonic orchestras. Germany has been named the world’s second most valued nation among 50 countries in 2010. A global opinion poll for the BBC revealed that Germany is recognized for having the most positive influence in the world in 2011.

Arts:
The German arts have enjoyed international prestige through its diverse artistic styles brought to life by the renowned painters. Hans Holbein the Younger, Matthias Grunewald and Albrecht Durer were important artists of the Renaissance, Caspar David Friedrich of Romanticism and Max Ernst of Surrealism.

Music:
German music includes works by some of the world’s most well-known classical music composers, including Ludwig van Beethoven, Johann Sebastian Bach, Johannes Brahms, Richard Wagner, and Richard Strauss. Germany is the largest music market in Europe, and third largest in the world.

German philosophy is historically significant. Gottfried Leibniz's contributions to rationalism; the establishment of classical German idealism by Immanuel Kant, Johann Gottlieb Fichte, Georg Wilhelm Friedrich Hegel and Friedrich Wilhelm Joseph Schelling; Arthur Schopenhauer's composition of metaphysical pessimism; the formulation of communist theory by Karl Marx and Friedrich Engels; Friedrich Nietzsche's development of perspectivism; Gottlob Frege's contributions to the dawn of analytic philosophy; Martin Heidegger's works on Being; and the development of the Frankfurt school by Max Horkheimer, Theodor Adorno, Herbert Marcuse and Jürgen Habermas have been particularly influential. In the 21st century Germany has contributed to the development of contemporary analytic philosophy in continental Europe, along with France, Austria, Switzerland and the Scandinavian countries 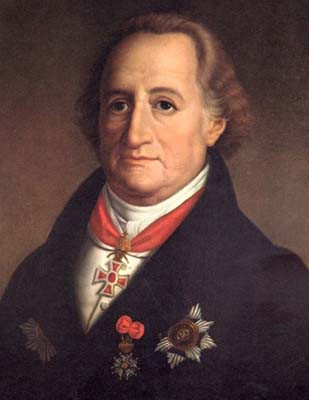 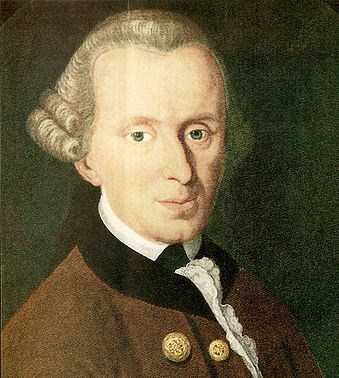 German cuisine varies from region to region. The southern regions of Bavaria and Swabia, for instance, share a culinary culture with Switzerland and Austria. In all regions, meat is often eaten in sausage form. Organic food has gained a market share of ca. 2%, and is expected to increase further. Although wine is becoming more popular in many parts of Germany, the national alcoholic drink is beer. German beer consumption per person is declining, but at 121.4 liters in 2009 it is still among the highest in the world. The Michelin guide has awarded nine restaurants in Germany three stars, the highest designation, while 15 more received two stars. German restaurants have become the world's second-most decorated after France.

Twenty-seven million Germans are members of a sports club and an additional twelve million pursue sports individually. Association football is the most popular sport. With more than 6.3 million official members, the German Football Association (Deutscher Fußball-Bund) is the largest sports organisation of its kind worldwide. The Bundesliga attracts the second highest average attendance of any professional sports league in the world. 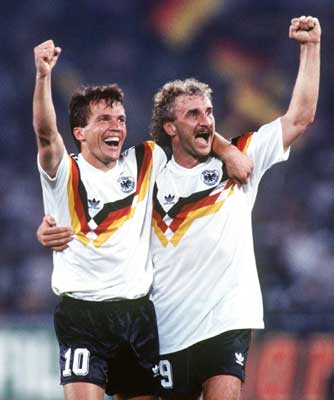 Lothar Matthäus and Rudi Voller
Germany is one of the leading motor sports countries in the world. Constructors like BMW and Mercedes are prominent manufacturers in motor sport. Additionally, Porsche has won the 24 Hours of Le Mans, an annual endurance race held in France, 16 times, and Audi has won it 9 times. Formula One driver Michael Schumacher has set many motor sport records during his career, having won more Formula One World Drivers' Championships and more Formula One races than any other driver; he is one of the highest paid sportsmen in history. 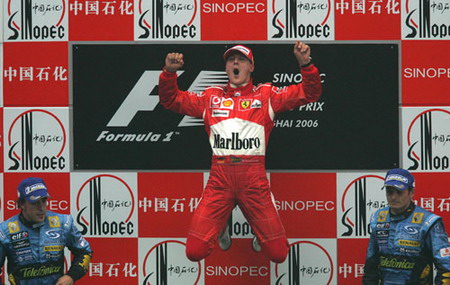 Michael Schumacher
Historically, German sportsmen have been successful contenders in the Olympic Games, ranking third in an all-time Olympic Games medal count, combining East and West German medals. In the 2008 Summer Olympics, Germany finished fifth in the medal count, while in the 2006 Winter Olympics they finished first. Germany has hosted the Summer Olympic Games twice, in Berlin in 1936 and in Munich in 1972. The Winter Olympic Games took place in Germany once in 1936 in the twin towns of Garmisch and Partenkirchen.
Cost of living:
Food:
Transport
Utilities:
Leisure:
Rent:
Our candidates paid in general an average of 300 € for a 1 bedroom apartment, 350 - 400 € for 2 bedroom apartments and 450 – 500 € for 3 or even 4 bedrooms apartments. For around 600 € some candidates even rented small houses with garden.